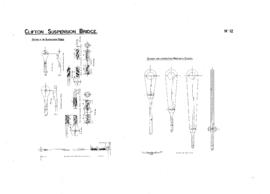 Working files created by consulting engineers, Howard Humphreys & Sons and their successors dating from the 1950s to the 1980s containing correspondence, notes and reports principally regarding work and investigations carried out on the suspension rods, the clevis plates, hanger straps and bolts. This series also contains project files of repairs and renewal to the suspension rods carried out in 2009-2011, 2014-2015 and 2020.

In 1877 two rods broke and in 1887 a further three rods in the centre of the bridge were damaged. While both breakages occurred during two gales, in 1887, consulting engineer, Thomas Airey attributed this damage to the prior weakening of the suspension rods due to the continuous fast driving of carriages over the bridge. This was used as evidence to be used for the passing of the 1888 Act, which enabled the Clifton Suspension Bridge Company to ban horses trotting on the bridge.
Under Airey's recommendation, around 100 top and bottom suspension rod bolts from the centre of the bridge were replaced with steel ones in 1891.
In July 1910 some of the steel bolts, attaching the ends of the suspension rods to the clevis plates were found to be corroded and accordingly, between 1910 and 1911, 103 of the 1 1/2 " bolts were replaced with Farnley iron bolts with case-hardened shanks.
In 1923 three suspension rods were tested: Leigh Woods north, nos. 10 and 24, and Leigh Woods south no. 7. The tests showed that there was a weakness in some of the welds used to construct the suspension rods.
In 1952, Howard Humphreys proposed to test various components of the bridge. This included 12 suspension rods, 6 pairs of hanger straps, and 12 each of the lower and upper bolts. However, the full testing of all these parts was not completed.
In the 1970s a project was carried out to assess and renew the bolts holding the suspension rods to the hanger straps and clevis plates. In 1971 Howard Humphreys & Partners inspected 62 suspension rods; this confirmed that wear had taken place on the suspension rod eyes, the bolts, the clevis plates and the hanger straps. It was decided to replace the worn bolts with smaller diameter stainless steel studs. The worn suspension rod eyes were filled with weld metal then drilled and reamed out to accept an interferome fit PTFE coated bush. A finite element stress analysis of the modified suspension rods was undertaken. The clevis plates and hanger straps were fitted with two mild steel collars, then the gap between them and the worn hanger straps were filled with an epoxy resin material specially formulated for the job by Yarsley Research Laboratories Limited. The first onsite trials were undertaken in 1974 on two suspension rods, and following bolt corrosion problems, a second trial was undertaken using a different grade of stainless steel for the studs and using corrosion inhibitors. In 1977 the trial rods were inspected and found to be satisfactory. In May 1978 the replacement of the remaining 64 bolt assemblies was started and completed in the summer of 1980.
In April 2009 a crack was noticed in suspension rod 3 Leigh Woods North by a member of the public; this led to an investigation by consulting engineers Flint & Neill. Following recommendations from the investigation, ten suspension rods were replaced in 2010 - including the cracked suspension rod which has been displayed in the Visitor Centre since 2014 - and seven of the rods were refurbished. The rods which were replaced in 2010 were: CN4, LWS13, LWS34, LWN24, LWS8, LWN5, LWS16, LWS31, LWN3, LWN17. Further refurbishments of the suspension rods were carried out in 2014/2015 and 2020.