Engraving entitled 'A View from Durdham-Down near Bristol. Looking down the Avon to Kings-Road, & the Welch Mountains'

Print entitled 'A View of St Vincents Rocks with the Hot Well's from Mr Warrens House...'

Print showing a view of Bristol from the South West entitled 'City of Bristol, Gloucestershire & Somersetshire'

This collection consists of material created by the Clifton Suspension Bridge Trust (CSBT) and its predecessors during the course of its business. Also included are papers created by the Bridge's consulting engineers and deposited with the CSBT, these are:
Howard Humphreys & Sons and Howard Humphreys & Partners (1910 - 2006)
Flint & Neill Partnership/Cowi (2006 - ) 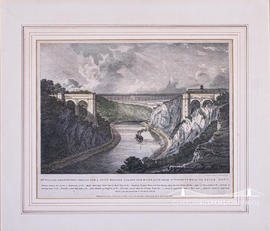 Coloured print of Brunel's design for the Gateways to the Suspension-bridge over the Avon, Clifton