Item 234 - Postcard of the Clifton Suspension Bridge and Hotwells 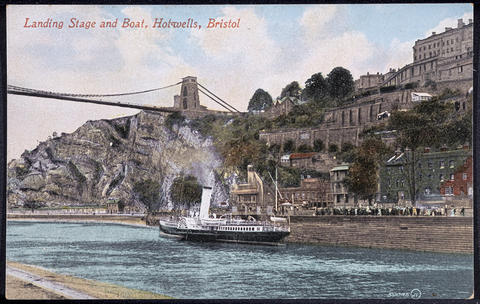 Postcard of the Clifton Suspension Bridge and Hotwells

Valentines of Dundee was founded in 1851 by James Valentine (1815-1879). Initially concerned with engraving, printing and stationery, the firm soon adopted photography. In 1855 Valentine erected one of the largest photographic glasshouses in Britain. About 1860 he started selling topographical photographs, converting a barouche into a mobile darkroom. His son, William Dobson Valentine (1844-1907), entered the family business in about 1860 after training as landscape photographer in the studios of Francis Frith, the largest English publisher of commercial landscapes at that time.

From 1882 Valentines branched out to include English as well as Scottish views, producing different sizes of grouped prints and stereoscopic photographs. Upon James' death in 1879, his sons William and George Dobson Valentine (1852-1890) took over the company. Based in Dundee, William pioneered large scale photographic processing and photo-mechanical printing and undertook the first unsuccessful attempts at submarine photography in connection with the investigation of the Tay rail bridge disaster early in 1880. In 1898 they started producing picture postcards. In 1900 under Managing Director Harben James Valentine (1872-1949) they became a private limited company, employing their own staff photographers and artists and also buying images from local and national photographers and agencies. By the 1950s, the production of postcards began to wane as greetings cards became more profitable. Failing to take advantage of colour photography, in 1967 they stopped publishing monochrome postcards and by 1970 they ceased publishing postcards altogether.

The major archive of monochrome topographical views by James Valentine & Sons is held by the University of St Andrews Library. For further details of this collection please contact the Library, or refer to http://www.st-andrews.ac.uk/library/specialcollections/