Item 118 - Lithograph showing Mr William Armstrong's Design for a Chain Bridge Across the River Avon, from St Vincent's Rock to Leigh Down 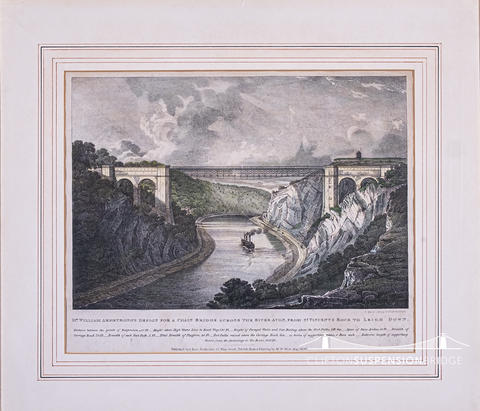 In 1828 William West leased and restored a ruined windmill to create the observatory in Clifton. He was an accomplished artist who also took an active interest in engineering and science. He travelled to Fribourg, Switzerland to research the use of wire in suspension bridges and on his return in 1835, he submitted a report to the Directors of the Clifton Suspension Bridge Company. Some of the bridge trustees - like T. L. Coulson - owned his paintings (Ref. "Conversazione of the Graphic Society", Supplement to the Bristol Mercury, 22 December 1860, p.2).
West also introduced early forms of photography to Bristol; in April 1839 he was advertising photosensitive paper for sale and displaying his photographs to the public, in November of the same year he was demonstrating the photographic process to school children and in 1842 he wrote to Fox Talbot asking permission to use his calotype process. (Ref. "Advertisements & Notices", Bristol Mercury, 27 April 1839; "Latest Intelligence", Bristol Mercury 9 November 1839)

William Armstrong was born in Perenwood, Northumberland in c.1780. In 1824 he became resident engineer to the Thames Tunnel, recommended by Bryan Donkin and John Rennie. He resigned through ill-health in 1826 and was described as being ‘of Bristol’ in the Worcester Journal. Colvin lists him as an architect and civil engineer in Bristol and he became a building surveyor there from 1836 until his death in 1858.

Kindly donated to the Trust by the family of Dr A J G Dickens.